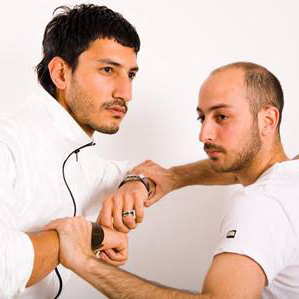 Demir & Seymen are Demir and Sencer Seymen.
The pair have been producing electronic music together since February 2008. Influenced by Hip Hop, RnB and Dark Metal, their music covers a wide spectrum from laid back Deep House to straight Techno, from groovy club music to deep and meditative DJ sets. Their debut release “Chiclown” featured three tracks that spent several weeks in the Beatport charts. The follow up EP on Highgrade entitled “Backshaker” found diverse DJ support from the likes of Johhny D, Richie Hawtin and Barem.
It began at Tresor in the winter of 2006. It was a Wednesday and in those days it only cost three euro to get in! That was the first time they met. At the time they weren’t producing their own music, but were beginning parallel experiments in DJing. It didn’t take long for Demir and Seymen to find themselves together at one afterhours party or another, both taking control of the turntables. It was clear that the two shared a similar taste in music, and because of their complementary skills they were pretty soon working together behind the decks. In February 2008 they began the project they had long talked about, a production duo that bore high quality results in July 2008, with the release of their first three tracks on Highgrade.Demir came to Berlin in 2002 as a student. Before that he was based in Bielefeld and listening to a range of Hip Hop and R&B. Not long after landing in Berlin he came into contact with the Berlin electronic scene and started to frequent clubs and buy records. But he was hardly just a tourist or simply a fan of the scene, he was always looking to make a contribution and started to spin records. In 2005 Demir and four friends founded the Netlabel, Pentagonik, a label which has become a household name in Berlin dance music. Demir selects the music and the artists, as well as playing at monthly parties at Watergate and Arena club, including gigs alongside such names as Matt John and Ray Okpara.Seymen arrived in Berlin in 2002, the same year as his future production partner. Springing from Istanbul, he spent most of his musical youth letting his hair grow long and screaming into a microphone in pursuit of a dark Metal dream! Shortly after arriving in Berlin he discovered the Techno sound the city is famous for. He managed to borrow two turntables and a few records, and two months later was playing his first gig. He developed a wide ranging taste for electronic music, from Deep House to straight Techno, groovy club movers to moody and meditative sets.Demir&Seymen are not only influenced by Metal, Hip Hop and RnB, but also draw from a musical upbringing of Turkish music and folk songs. While they don’t play traditional Turkish instruments themselves, or use obvious samples from their homeland, the influence remains and adds a certain feeling and emotion to the music that their audience can identify. They bring an atmosphere that is more than just a party.

At the moment the duo are working on the next release and planning their first album.