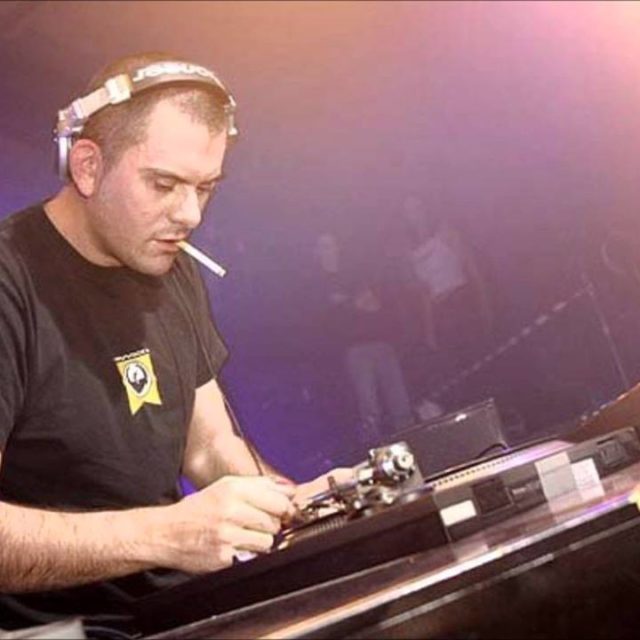 CJ Bolland has been a part of international dance scene from the early days in the late eighties to the current global clubsound of the new millennium. That large span of time is reflected in his wide choice of records as CJ routinely detours through breakbeat and house in his renowned sets of hard techno. He is widely acclaimed for his popular dj-sets, which time and again remind us that CJ is first and foremost an groundbraking electronic music producer.

CJ Bolland is born in Yorkshire in the United Kingdom in 1971. It was England that provided his first musical influence. ‘I was 2 and I fell in love with the Dr Who theme tune. I just loved the strong electronic sounds,’ says CJ. The Bolland family moved to Antwerp, Belgium when CJ was three. This love of electronic music was to strongly colour CJ’s production career, which began in the mid-’80s. It was the Belgian new wave that had the greatest impact on the early days of CJ’s career. ‘In the ’80s the Belgian underground scene revolved round new wave, electro and body music from Front 242, Neon Judgement, The Klinik and I followed it religiously.’

His early efforts were aired on Belgium’s Liasons Dangereuses radio show: ‘I was featured every week with my home demo tracks. We had chats on air with the public on the progress of the music. It was great; direct feedback and my music going out to thousands when I was a spotty kid.’ When someone sent a tape to Ghent-based techno imprint R&S things really started to happen for CJ. ‘R&S liked the tape and invited me to check out their studio. The first day I spent 32 hours jamming with the big don himself, Renaat. The fact that I was not gonna leave without him kicking me out impressed him and he signed me up. The next five years where the kickstart of my early career’.

The first release on R&S was ‘Do That Dance’ in 1989 and the subsequent five years were very productive with CJ recording a string of singles as The Project, Pulse, Sonic Solution, Ravesignal, Space Opera, Schism and of course CJ Bolland. It was during this period that CJ recorded the turbo charged rave anthem ‘Horsepower’ on ’91’s ‘Ravesignal III’ EP and ’92’s ‘Fourth Sign’ LP which included the hypnotic ‘Camargue’ and the galloping ‘Night Breed’.

These tracks proved to be a benchmark for nineties electronic music and CJ was soon performing around the world from Japan and Australia over Europe to the United States. A second album for R&S was ’95’s ‘Electronic Highway’. A year later CJ left R&S to sign an exclusive 5-album deal with Internal/Polygram. The first of these LPs was The Analogue Theatre (1996) but it was a single from the same year that catapulted CJ into the stratosphere. That record was ‘Sugar Is Sweeter’ which reached number one in the US.

CJ is also well-known for his high profile remixes for Depeche Mode, Moby, acid house pioneers Phuture, Orbital, Sven Ví¤th, The Prodigy’s ‘No Good’, and Tori Amos amongst others. In 2000 CJ set up his own record label Mole: ‘I felt it was time I took a more hands on approach to what happens with my music. Now I truly can be free in my music and can decide when and what goes out there,’ he says. ‘It brings freedom and that freedom allows me to be creative again.

CJ’s style over the years have proven to be eclectic, and this trait was strongly reflected in the 2005 project of Magnus. CJ collaborated with Tom Barman of the Belgian band dEUS in the pop/danceproject Magnus. Rock star Tom Barman (dEUS) and dance legend CJ Bolland came from radically distinct musical background but took it succesfully to a recording studio in search of a common sound. The album The Body Gave You Everything (2005) was the result. ‘It was a strange combination but the sound and rythm of the album is completely refreshing’, stated CJ in several interviews. The single Summer is Here quickly reached number one in the charts and remained there for several weeks.

In december 2006 Bolland chose to go solo again and released The 5th Sign with Belgian online record label, The Wack Attack Barrack. Same year CJ Bolland produced the dEUS album Pocket Revolution, and collaborated on other several other productions including The Glimmer Twins, Plastyc Buddah, Garage Sauvage to name a few. In 2009 a new album by CJ Bolland will be released. ‘I’ve been working on new material for some time now and I’m looking forward to go on tour with it. I can’t wait to check out the reaction of the crowd’.

Meanwhile CJ Bolland is back in the studio with Magnus. A new Magnus album will also be released in 2009.